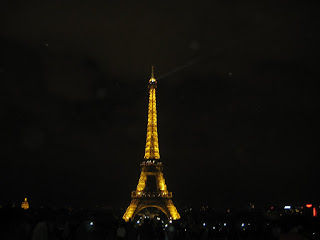 Mark found out that September 21st Monday was a holiday in our canton. With the upcoming three-day weekend, we booked a spontaneous trip to Paris, with a day-trip to Brussles included! The TGV high-speed train runs from multiple cities in Switzerland. The Lausanne TGV trains were booked so we caught one from Geneva last Friday night. It is a 3 1/2 trip from there to Paris. We stayed at the Radisson Blu Le Dokhan's Hotel, in the Trocadero district of Paris. Saturday morning we got on the high-speed train from Paris to Brussels, Belgium for a day trip. That ride is a short 1 hour 22 minutes! 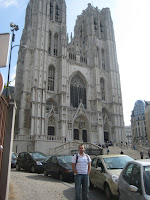 We arrived in Brussels and started our walk into town to see the cathedral. Cathedral St. Michel & St. Guluda, begun in the 13th century, took 300 years to build. The Roman-Catholic church was beautiful! Standing on steps of the cathedral, you can see a view of the city 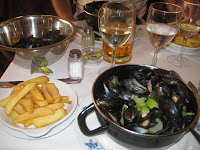 with the top of the town hall building in the distance. From the church we walked through the Royal Park and checked out the facade of the Royal Residence before heading down the hill to the main square. This area of the square is fantastic! It has lots of shops and restaurant to peruse. Our hunger took us to a restaurant for lunch that served Brussels' infamous dish, mussels and fries...yum!
Our day was made even better by the festival that we came across in the main s 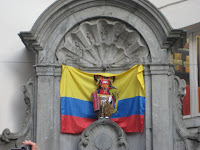 quare. It was a cultural festival, and lots of booths were set up serving beer and food. We were entertained 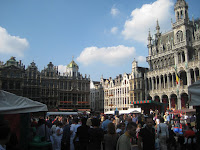 with bands dressed in traditional cultural country attire, playing music. We went and saw Mannekin Pis, a statue of a little boy peeing! It is one of Brussel's most well-known sights. The locals have taken to dressing him up for holidays, and this day was no exception. We couldn't really see the statue as the little boy was dressed to-the-nines for the festival! The origins of the statue remain a mystery, but it is a fun sight to see. 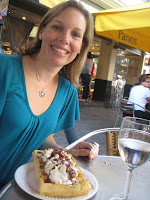 We decided to take a break for a little bit, so we sat down and enjoyed a Delicious Belgium waffle! I had chocolate and whip cream on mine, and Mark enjoyed chocolate and caramel toppings! So YUMMY! After that, we went to a near-by chocolate chop, (which can be found on almost every street) for another infamous Belgium treat! After all, you can't visit Belgium without trying at least three things: beer, waffles, and chocolate!!
Our train was due to depart soon, so we headed back to the square to enjoy one more beer. Mark and I both thought Brussels was great! I recommend it to anyone looking for places to visit in Europe!

Sunday: We woke up and prepared for a day of Paris sight-seeing!!! It was my very first time to the city, so I was very excited! We headed to the Eiffel Tower first, as our hotel was jus 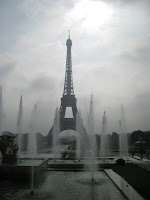 t a few blocks away from it. As many pictures as I have seen of the Eiffel Tower, I was still in awe of the real thing. The towering monument was absolutely amazing. The square around it has some beautiful sculptures as well. It is an amazing sight. Although you have the option of going up it, Mark and I passed on that an 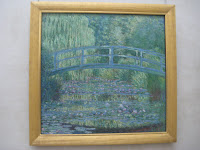 d kept going on our walk to Musee d'Orsay. We walked parallel to the river, and saw a lot of great sights along the way. The thing I love about Paris is so much of the architecture from the past still exists. Everywhere you look, there is something interesting to see! Musee d'Orsay houses an amazing Impressionism collection and sculptures. It was great to see so many Claude Monet paintings that I have learned about in school. :) From there, we went to Ile de la Cite where the the Notre Dame cathedral is located , a magnificent form of architecture to view. After walking around Notre Dame, we headed towards the Louvre. We decided to enjoy the grounds surrounding the Louvre instead of the museum, as we needed a break from walking! (We are headed back to Paris in a couple of weeks so we'll get to see it then.) We bought a box of French chocolates ate them in the park, while resting our tired feet!

We went back to our hotel for a break and then ate dinner at a restaurant nearby. Our last outing of the night was to head back to the Eiffel Tower where we caught a view of it all lit up!
On Monday, we packed up our belongings and checked out of the hotel in the morning. We stashed our bags for a couple of hours while went sight-seeing again before we had to go 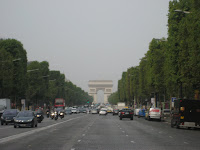 to the train station. We took the metro to the Arc de Triomphe and watched the crazy maze of cars try to circle around the main square! This round-about is one of the few where the cars entering the circle have the right-of-way. It makes for some heart-pounding viewing! From there we walked the Champs-Elysees, one of the most famous avenues in the world. It is lined with high-end shops, restaurants and apartments buildings. After our window-shopping was over, we hopped back on the metro and went back to the hotel to pick up our bags. Our fabulous Paris weekend had come to end. It was an incredible weekend...I can't wait to go back again in a couple of weeks!
Posted by Vanessa at 9:02 PM No comments: 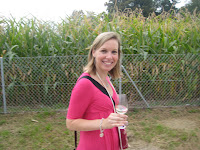 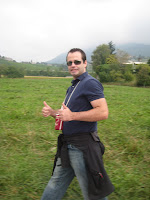 Route de Gourmande Wine-tasting!
Sunday afternoon we went on a wine-tasting walk through the Lavaux vineyards, just outside of Lausanne. It was so much fun! I have been wanting to do some wine-tasting ever since we arrived, and this was the perfect way to do it! Our new friend Renee, who we met a couple of months ago organized it, so we had a group of 13 people to walk with.

We took a train to Montreux, where we met the rest of our group at the bus stop and took the bus to Chaitilly where the walk started. We had some time before it started, 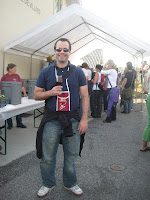 so Mark and I took a walk around to check out the booths selling honey and other products. Then it was our turn to start walking! Before we set off, we were given a wine glass and a sleeve to put around our neck to carry the glass! It was great!

Our walk took us right through the vineyards and we enjoyed a lot of food and wine. Each stop provided us with a selection of wines an 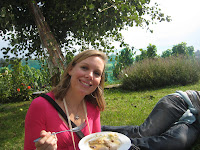 d a different food course. We started off with an appetizer (known in French as an "apertif") of bread and sausage, followed by carrot soup, the main course of chicken and gravy over a cheesy-potatoe dish, then a cheese plate, and finally dessert!

Everyone on our walk was really nice and by the end of the evening, we had formed some new friendships and tasted a lot of great local wines! We ended the evening with a few beers at a restaurant by the lake in Montreux! It was a great day! 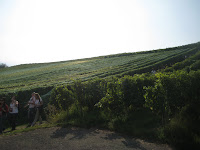 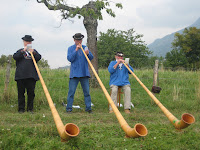 Walking through the vineyards & Swiss Alpine Horns entertaining us!
Posted by Vanessa at 10:01 AM No comments:

I decided to start training for the Lausanne Half Marathon, which will take place on October 25th. Lausanne is built on a set of steep hills, which I discovered today, will make training pretty interesting! My run down the hill was a breeze, while the run back home was pretty brutal! Luckily, I can mix up my training routes with flat runs on the lakeside trail. I'm looking forward to running my 1st international race!
Posted by Vanessa at 3:02 PM No comments: 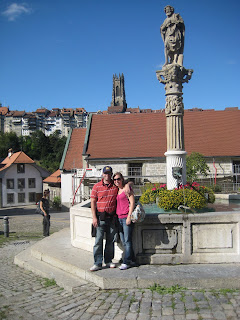 Fribourg
Mark and I headed to Fribourg on Saturday morning to meet up with his friend Amanda, her husband Patrick, and their little boy Jasper, who is two years old! We had a lot of fun catching up with them and walking around the Old Town area. The city was founded in 1175 and has a beautiful cathedral that was built between 1283-1490. It is also known as the city that links the German and French-speaking portions of Switzerland. We enjoyed lunch in the Old Town and walked through the market area. Jasper loves fountains, and he was very happy that we found a few on our walk! It was great to meet up with friends and explore a new area.
Posted by Vanessa at 2:22 PM No comments:

Evian, France
Mark and I went on a late-afternoon trip over to Evian on Sunday. Yes, that is the city where Evian water is bottled! It is a small, but beautiful lakeside town directly opposite Lausanne on Lake Geneva. The ferry ride is a quick 35 minute trip. We walked along the lake for a few minutes until we reached the Evian Casino and we decided to check it out! It turned out to be lots of fun...we had a drink and played the slots for a little bit...hitting a very small jackpot of 154 Euros! LOL! We only stayed for about an hour before heading back on the boat, but it was a really fun outing for a Sunday afternoon!

Posted by Vanessa at 8:16 AM No comments:

Mark and I took the train to Bern last night to watch Coldplay perform! The concert was at a soccer stadium just outside of the city center, so we changed trains at the main station and took a regional train one stop to the venue. It was a really good concert, and had some added entertainment with a thunderstorm in the second half of the concert! There was a lot of thunder and lightning but the band kept on playing! Luckily, our seats were covered, but we got drenched after the concert during our walk back to the train station! Here's a video clip from last night! 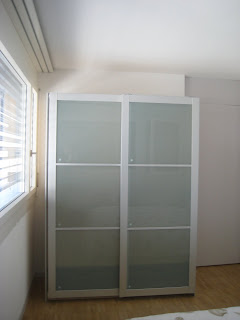 A handyman came and built our closets yesterday. We are now officially unpacked!
Posted by Vanessa at 1:05 PM No comments: