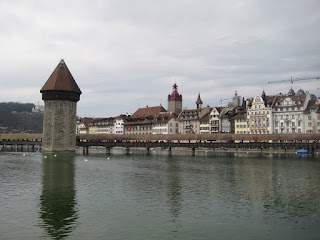 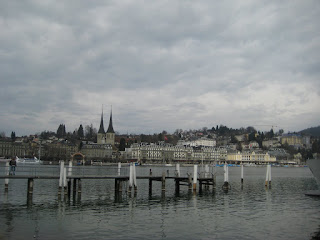 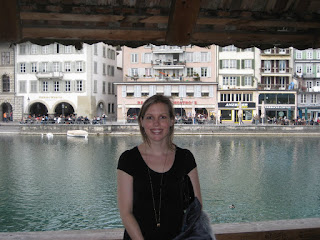 Standing on the Chapel Bridge! 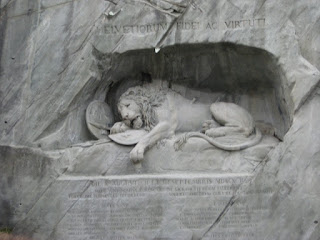 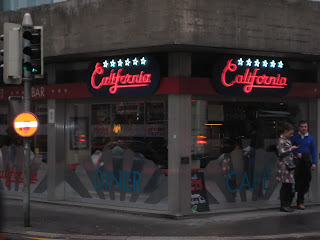 California Bar & Restaurant!
This past weekend we hopped on a train and headed to Luzern for the weekend. We were invited to a pub crawl by a friend of mine named Julia, whom I met last summer when one of our mutual friends vacationed in Switzerland.

We arrived in Luzern in the early afternoon and ditched our suitcase in our hotel room before walking over to the old town. Luzern is situated on Lake Luzern and the River Reuss. To cross over to the medieval town, we crossed the Chapel Bridge, famous for being the oldest wooden bridge in Europe, dating back to the 14th century. Once over the bridge, we lingered among the old town streets for a couple of hours, popping into interesting shops along the way, trying to dodge the rain drops. We also viewed the Lion Monument, which is a beautiful wall carving of a lion that was dedicated to the Swiss guards who were killed during the French Revolution.

We started our evening pub crawl with an early dinner at, ironically, the California Bar and Restaurant! LOL! We ate our meal with three others who were also on the pub crawl; Alex and Dennis, who live in Luzern and Alex's brother, Lionel, who was visiting from the States. We had a good time getting to know them over hamburgers and then we headed over to Legends Irish bar, our first bar on the list! Over the course of the evening, we met a lot of nice people and made our way through a lot of bars in Luzern! It was a really fun night!

We slept in on Sunday morning and then headed back to Lausanne for a relaxing Sunday afternoon. Luzern is a beautiful city and hopefully we'll get a chance to go back in the future.
Posted by Vanessa at 4:48 PM